The first camera that I owned was a Kodak Instamatic. When my interest in photography grew,  I wanted to have a SLR camera with interchangeable lens.  I thought that this will enable me to shoot better pictures but I found out later that this was not the case. I bought my first SLR when I was training in Japan It was a Nikon FM, at that time, the ‘entry-level’ Nikon body. I coupled that with the lowest priced Nikkor zoom lens – the 43-86mm f/3.5. While I was not able to take great pictures, mainly because of the user and not the hardware, I was able to learn about the technical aspect of photography.

The Nikon FM is entirely a fully manual camera which means that no batteries are needed to operate the basic functions. It does have a light meter which uses button cells. The aperture and shutter speed is adjusted until a centre LED in the view finder is lit to show correct exposure. The maximum shutter speed is 1/1000th sec with a flash synch speed of 1/125 sec.

Over the years I purchased additional lenses. I added another low cost lens, albeit a Nikon one. This was the E-Series, 100mm f2.8.  The E-Series lenses were produced for the Nikon budget SLRs – The EMs.  With this lens, I learnt lessons in shutter speed and depth of field. Many of my photos were blurred due to the relative slow shutter speed used or when I shoot fully opened. Remember these were the days before VR and IS technology.

Two more lenses were added before I moved from the Nikon system. One was the 35mm f/2.8 which was the best Nikkor lens I owned. The other, bought at a bargain sale, was a Soligor 200mm f/3.5, which was the worst. Pictures taken with the Soligor were very soft and had very poor contrast. However, the mechanicals of the Soligor is good, because even to this day, the aperture and focus rings are still turning smoothly.

In the 80’s, electronic cameras with through-the lens (TTL) metering, and auto aperture, shutter and integrated motor drive were available at an affordable price. I then decided to purchase my next camera body. That’s a story for the next instalment. 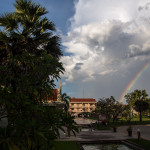 I visited Siem Reap in November 2014. I have thought that Siem Reap was a back water town and boy was I wrong. The city is the main gateway to Angkor which is a UNESCO Heritage Site. There are numerous archaeological sites scattered over an area of 400 km2. The town is full of tourists and you will have no difficulties finding suitable accommodations to meet your budget.

Transportation was not a problem also as hired cars and Tuk-Tuks were readily available around the clock. As I stay right next to the old market and Pub Street, there was a wide selection of restaurants and food outlets to fill the stomach.

The sights were astounding. I will let the gallery show you some of the sights.