Mention the Canon IXUS and most photographers will think of their streamline compact series of digital cameras. However, do you know that the first IXUS were film based. Canon introduced the IXUS to use a new film format. The APS or Advance Photo System was introduced in 1996. It uses a smaller film cartridge than the standard 35mm which allows camera body to be designed smaller and slimmer.  It is also easier to use as it is uses a drop in film catridge. Read more details of the APS film system in link below.

However, APS did not take on as the film were more expensive to buy and process. There were also a limited choice of cameras to choose from. The standard 35mm films based cameras were preferred by professionals because of the availablity of better quality films like slides, B&W and a wide range of ISOs types.  Amateurs prefers the 35mm film because they have a large selection of low cost cameras to choose from, some of which were of better quality.  The APS film cameras were finally  overtaken by digital cameras at the turn of century. Kodak and Fuji Film were the last manufacturers of APS films and they discontinued production in 2011.

Although the APS film cameras were short-lived, the APS acronym is used now to describe cropped frame camera sensors- i.e. sensor size smaller than a 35mm film (also called full frame). The nearest equivalent is the APS-H sensors used in the Canon 1D (MK1 – Mk IV) models which have a cropped factor of 1.3.   APS-C sensors of Canon and Nikons have a smaller area than the APS film.

The IXUS camera has a slim stainless steel alloy 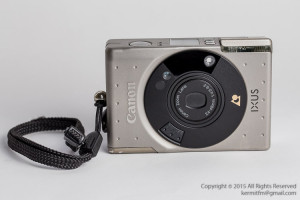 body. The lens is a 24-48mm f/4.5-6.2 lens.  The power switch is at the front of the camera below the lens. You can see this in the picture. It also has an integrated pop up flash. This model has a design flaw where the flash does not close completely which you can see this in the photo. It was sent it for repairs once and but the problem returned after a few months of usage. Canon solved this with a fixed position flash in their subsequent models.

The IXUS use a Lithium CR2 3.0V battery cell.  Composing is via an optical viewfinder. The switch on the right of the viewfinder lets you set the aspect ratio of the – C for Classic, H for HDTV and P for Panorama. At the top right of the rear of the camera are the zoom control. The layout is ergonomically friendly for a small camera.

The top plate has a small LCD screen which shows the frame counter and camera settings. The IXUS allows time stamping and predetermined captions. The shutter button is on the top right with pop up flash on the left.

Canon produced nearly 20 models of the APS in the IXUS/ELPH series. By then, digital compact cameras were gaining popularity. Canon introduced the Digital IXUS , a 2.11 MP in May 2000.The last model of the APS film series was the ELPH Z3, introduced in March 2002. Click on the link below for the complete range of Canon APS IXUS series of camera.

Shown below is how the APS IXUS size compares with a 35mm compact, the Olympus XA3 and the digital IXUS S400. Note that the Olympus does not have a built in flash.

References (This will open a new web page)